From September 24th to October 9th, Your Favorite Enemies will be on tour in Japan!
Here’s a little glimpse of what awaits you!!

More information about the tour here

Your Favorite Enemies are embarking on a Fall Tour in Japan!
Make sure you catch them at one of their shows!

The official video clip for the song “A View From Within” from the album “Between Illness And Migration” has just been released. Watch it now!

We are greatly saddened to announce that Your Favorite Enemies’ “The Carp Leaping Over The Dragon Gate” China Tour had to be cancelled due to unfortunate circumstances that were out of the band members’ control.

Major irregularities and important schedule alterations led the band members to take the highly heartbreaking decision of cancelling the whole tour. Despite their ultimate attempts to solve the several problematic elements, and despite their multiple new schedule scenarios, nothing could have been done in order to prevent the announcement of what became inevitable news.

“The last two days have been quite emotionally intense for us, as we’ve been informed by our advisors that multiple irregularities and major logistic elements of our 6 week China tour were found, which was significantly alarming enough to put the whole tour in jeopardy. We just had the band’s gear piled up by the studio door when we received the urgent call. We were shocked… Not so much by the fact that we worked on that tour since last October, but by the fact that we were truly eager to see our Chinese friends again. Right after receiving the confirmation of those major issues, we started working in order to save the tour, or at least a segment of it. From reconfiguring the whole tour from date to date, to setting up multiple concert residencies in a few clubs, to renting empty spaces and proper gear in order to set up our own “clubs” every night… We have a reputation of being resolutely determined, but we simply didn’t have the time to make any of those alternatives happen. So we had to face the reality of the situation we were in. All our luggage is still by the door as we speak, it’s really difficult to accept such an unreal conclusion… it’s just unreal”

Says Jeff Beaulieu, trying to explain the excruciating nature of the reasons that led them to take the implacable decision of cancelling the tour.

When asked about the band members’ state of mind regarding the process that led to such improbable decision within hours of their departure to China, Alex Foster broke the relative silence saying:

“First, it was really a tough “tearing apart” type of bad situation, but I think the most abominable essence of having to take such a decision is the fact that we did know that our dear brothers and sisters, who were excited to meet with us again, just as much as we were when we initially envisioned that second China tour, will be greatly disappointed from our tour cancellation. That’s the true devastating reality we were facing and are now afflicted with. We had a vision for that tour, we worked very hard to make it happen and we were incredibly ecstatic about meeting our loved ones again. But after being informed of all the major anomalies found in the logistic of the tour, it would have been worst to disregard the reasons that ultimately led us to cancel the tour… the consequences could have been really disastrous. We were stuck right in between our hearts and reason. At the end of all the crazy attempts made and envisioned to save the tour, it would have been turning our vision into some reckless ambition to keep going. Regardless of all the work we put into it and all the magnificence of the vision we have, there’s no vision defining enough to put the physical and the emotional integrity of our team members at stake. That’s our first responsibility. And our Chinese brothers, sisters, friends, fans and loved ones deserve way better than another ambitious venture using their nation, like all the other gold diggers presently tearing China apart, for the promise of a quick dollar profit. The relationships we established in China have been defined by the communion of hearts and souls. That’s our commitment to the heart we have for our Chinese loved ones. They know we will go back to China very soon. You can mark my words.”

Foster also mentioned that the band members, along with their booking agents, are already in motion of reorganizing Your Favorite Enemies’ “The Carp Leaping Over The Dragon Gate” China Tour; a tour which they hope could be held by the end of the present year. On the same note, Beaulieu concludes saying:

“Again, we are deeply regretful that we had to cancel the tour on such short notice, but as you know us, we’ll be back very soon. As Alex said, “the blazing light of the true communion of hearts and souls can’t be kept captive or restrained by the darkness of any circumstances”. It’s so true; what we experienced in China is too vividly alive to be confined or to be extinguished. It’s a seed of life destined to bloom into hopeful wonders. No matter how hard the wind might blow, and however shaky the flame might be, it’s a relationship destined to blaze in a true eternal proportion.

Even if I feel like that shaky flame right now, I remain highly hopeful in what’s ahead in China, because I’m deeply assured of that vivid relationship we have with our dear brothers and sisters. Our hearts may be sadly beaten up right now, but our soulful guts have never been that resolute. Even if our disappointment is deep, the peace we have in the decision we took allowed us to have a blessed picture of the wonderful time ahead, of the exultation awaiting to arise. In the midst of that bad situation, the faith we have in our vision has never been that fulfilling… and the rest has yet to be unfolded. We can seed with sadness, but we’ll harvest with fabulous joy”

Therefore, despite the dreadful news of their China tour cancellation, Your Favorite Enemies’ camp has plenty of reasons to keep their spirits high and to rejoice, as they have recently been informed that their new debut album “Between Illness And Migration” has had a tremendous first week start in Japan, as Your Favorite Enemies is one of the highlight bands invited to perform at the famous “Great Escape” festival in the UK, as they are gearing up for their upcoming European promo tour and getting ready for the release of a new EP, set to lead the way to their international album release. 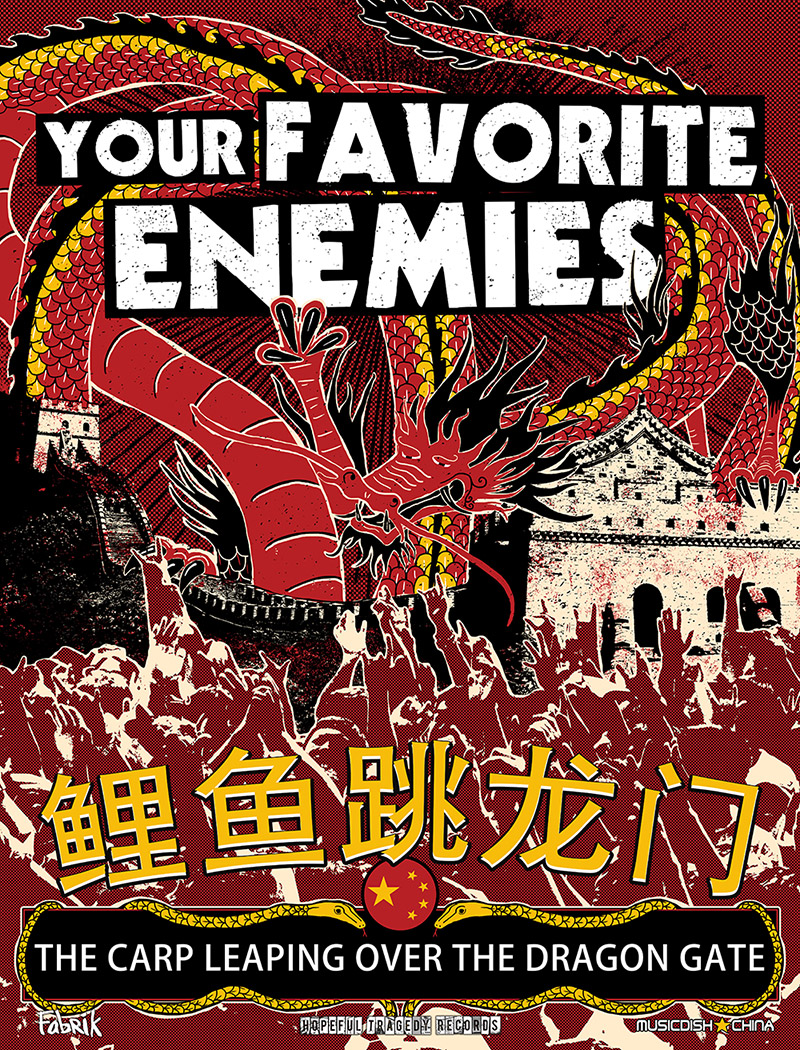 Your Favorite Enemies are embarking on a 6 week tour all around China! Their tour titled “The Carp Leaping Over The Dragon Gate” begins on April 2nd, and will end on May 14th. 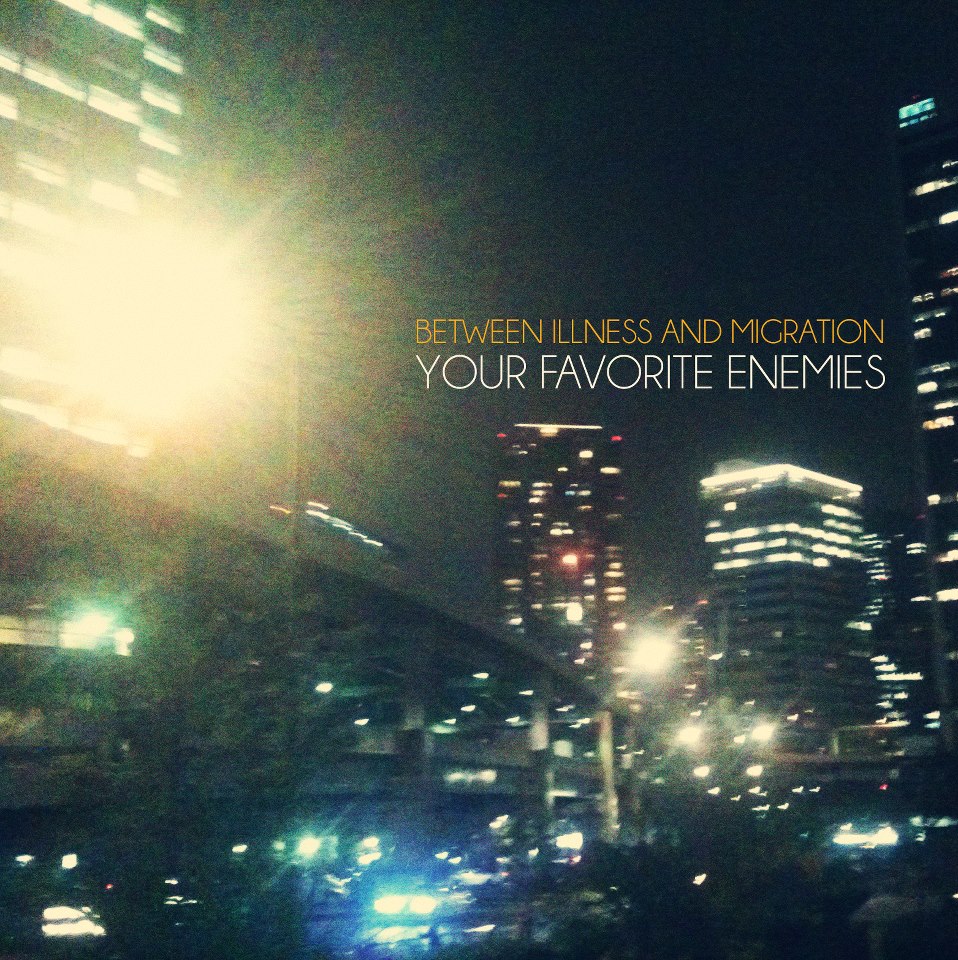 We are proud and honored to announce you that Your Favorite Enemies’ new album, “Between Illness And Migration” is now available in Japan. Release via King Records, the album can be found in all music store across the country. The Japanese version of the album contains a bonus track and has a booklet that has been fully translated in Japanese.

Your Favorite Enemies will be part of this year’s edition of the festival “The Great Escape”, held in Brighton, United Kingdom, from May 16-18.

Your Favorite Enemies are set to take part in Canadian Music Week this year again. The band will be live at the Tranzac on Thursday March 21st, at the Neutral on Friday March 22nd, and will also hold an acoustic set at Pandemonium on Saturday March 23rd. Your Favorite Enemies and all the YFE team members are very proud and deeply honored to announce that Hopeful Tragedy Records, Your Favorite Enemies’ record label, is now officially partnering with legendary Japanese label King Records, one of the largest independent Japanese owned record company and one of the most highly respected labels in Japan.

King Records dedicated and passionate team members will support and look after every aspect of Your Favorite Enemies album releases in Japan, whose next record is due to be out in March of 2013.